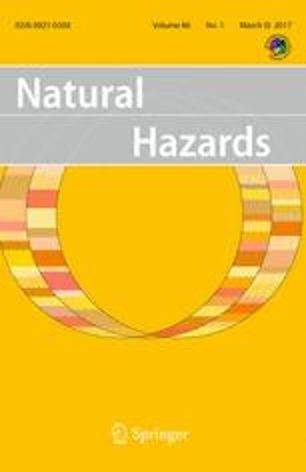 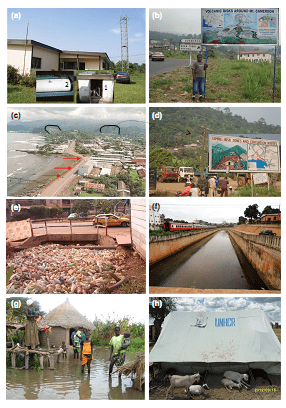 Of the 8 Millennium Development Goal (MDG) targets, eradicating extreme poverty and hunger (MDG target No 1) and ensuring environmental sustainability (MDG target No 7) are important entry points for disaster risk reduction because extreme poverty cannot be eradicated, and sustainable development cannot be attained unless disaster risk reduction is mainstreamed into development policies, plans and implementation. Disasters undermine the results of development and impoverish the community and the state (SFA 2015).

Cameroon was among the 168 countries that signed the Hyogo Framework of Action (HFA) in 2005, committing to take action within 10 years (up to 2015) to reduce human and socioeconomic disaster losses as a means to attaining the MDGs. Cameroon also signed, as one of the 187 countries, the Sendai framework for Disaster Risk Reduction 2015–2030 (MINATD 2015 ). The HFA emphasized that disaster risk reduction is central to development policy and a concern of multidisciplinary knowledge about humanity and the environment. From the civil society perspective, the Global Network of Civil Society Organizations for Disaster Reduction (GNDR) monitored national, regional and global progress toward attainment of the ﬁve ‘priorities for action’ of the HFA that were: (1) prioritizing disaster risk reduction by providing high-proﬁle leadership, establishing relevant policies and programs, and allocating resources to implement them; (2) identifying, assessing and monitoring disaster risks and improving early warning systems; (3) creating awareness at all levels of society about risks and providing information about how to reduce them; (4) reducing social, economic and environmental vulnerabilities and those related to land use through improved development planning and post-disaster reconstruction by all sectors; and (5) ‘strengthening disaster preparedness for effective response at all levels’ (UNISDR 2005 , p6). The GNDR carried out the monitoring from a bottom-up perspective via a program called Views from the Frontline (VFL), the main goal of which was to support effective frontline implementation of the HFA to build the resilience of vulnerable people and communities at risk to disasters. Views from the Frontline implemented 3 projects to measure the level of progress in the implementation of HFA. The ﬁrst VFL project in 2009 (‘ clouds but little rain… ’) was carried out in 48 countries in Africa, Asia and the Americas, by 400 Civil Society Organizations (CSOs). It sampled the views of 7000 respondents and provided proof that even though some governments had made progress (4 years after the start of HFA) in their national policies and legislations in establishing disaster risk reduction policies, these had yet to be translated into changes in the livelihoods of their people on the frontlines (VFL 2009 ). The second survey in 2011 (‘if we do not join hands… ’) was on the role of local governance on disaster risk reduction, i.e., the signiﬁcance of state and non-state actors working together to ensure the safety and well-being of their communities. It was carried out by 511 civil society organizations in 69 countries and had 20,290 respondents with 57 video case studies (including one from Limbe, Cameroon). Using 21 local risk governance indicators, VFL (2011 ) found that signiﬁcant barriers to the implementation of plans and policies at local level are lack of political authority, absence or inadequate capacities or ﬁnancial resources, and minimal or no support from central government (VFL 2011 ). The 2013 VFL project (‘beyond 2015 ’) was on ‘everyday disasters, community resilience and disaster preparedness.’ It was carried out by 450 CSOs in 57 countries and collected the views of 21,455 people on the frontline (VFL 2013).

Geotechnology, Environmental Assessment and Disaster Risk Reduction (GEADIRR) is involved in, among other sustainable environmental initiatives, using remote sensing technology in disaster risk studies in Cameroon. From previous desk and ﬁeld work of establishing the disaster risk proﬁle of Cameroon by GEADIRR (see Fig. 1 and below), one of the many important gaps noticed was that local communities (i.e., those at the frontline), the civil society and traditional stakeholders are not involved in knowledge creation and decision-making on matters of disaster risk reduction (GEADIRR 20 09). The VFL projects therefore offered an opportunity to investigate the Cameroon ﬁnding further and make suggestions to the Cameroon government, so GEADIRR expressed interest and was commissioned by GNDR as the Cameroon National Coordinating Organization (NCO) for the 2011 and 2013 VFL projects. Detailed results of the GEADIRR (2011) VFL survey on local governance on disaster risk reduction in Cameroon can be found in Buh et al. (2012).

In this paper, we present the results of VFL (2013) project in Cameroon. After giving a brief overview of the Cameroon disaster risk proﬁle, we compare the Cameroon results of the VFL (2013) survey with those from other West African countries and with the global average. We try to explain the observed differences within the context of disaster risk prevention (disaster monitoring), preparedness (early warning systems), and dissemination


This article was first published by Springer Link